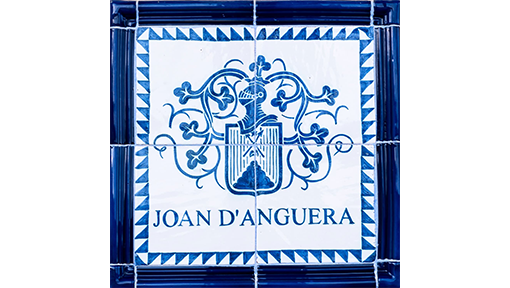 The Joan d’Anguera estate was founded in 1820.

Joan Anguera, second born child of the House Anguera and owner of several properties in the village of Darmós, set up his own estate. His parents helped him with money and a house known as “Ca Joan d’Anguera”. Additionally, despite not being the heir, he also inherited three vineyards that always belonged to his family: L’Argatà, La Planella and El Bugader.

Josep Anguera Cedó, son of Joan Anguera, expanded the holdings in l’Argatà buying neighbouring plots. Aside from the inherited vineyards, he also grew almond and olive trees, nonetheless vines were always the main crop, having a diversity of varieties of which Grenache and Carignan were the main ones. The resulting wine was sold in bulk to markets such as England or France.

Josep Anguera Cedó had only one son, Josep, who died very young. Consequently, he adopted his sister’s granddaughter as goddaughter and made her the heir, Maria Llaveria Anguera. Her marriage with Pere Anguera Castellnou, of “Ca Silveri” – house of respected farmers in Darmós–, resulted in a gain for the family. In those times, the house Joan d’Anguera represented the prototype of middle-class farmers in the region.

Pere Anguera Llaveria, son of Maria Llaveria, carried out a large transformation in the estate. He built a new cellar, an olive oil mill and bought the 12-hectare Finca Mas de Pedret. He continued making wine to sell in bulk, which was highly regarded amongst his buyers.

Josep Anguera Beyme, son of Pere Anguera, expanded the cellar built by his father and added to his holdings the 3-hectare plot El Tancat, as well as some bordering land for ease of access.He kept the old Grenache and Carignan vineyards and introduced the fashionable Syrah and Cabernet Sauvignon varieties.

In 1984, he began to bottle a proportion of his production, first as a young wine, Joan d’Anguera, and then, in the 1990s, he released Finca l’Argatà.

He also researched the adaptability of other foreign varieties to the region and, in 1993, the Generalitat de Catalunya awarded him the medal of Catalan Agriculture.

When their father died in 2000, agronomist Josep and oenologist Joan took over the estate.

In the early days, they continued to make structured, alcoholic and oaky wines, following the trend at the time.

In 2008 they started a total transformation of the vineyards with the aim of making wines in balance with the terroir, following organic and biodynamic methods and focusing on Grenache and Carignan in most of their plots.

In 2012 they achieved organic and Demeter certification in all their vineyards.